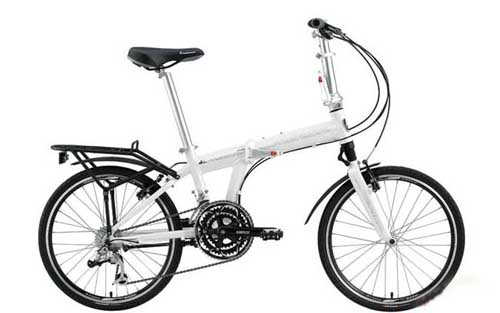 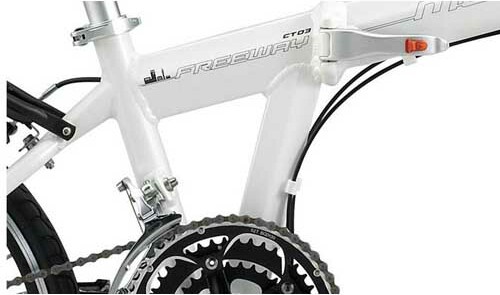 Merida Industry Co. announced a recall of its first generation Freeway CT03 and R3.0 folding bicycles.  The company is urging anyone who bought one of these bikes to return it to the store were they purchased it to replace a problematic safety device.  Merida introduced a patented safety folding button on these bikes between June and July 2008.  This device can be easily damaged when users try to unlock the button forcibly.  The recall effects 1,800 bikes.  The company began manufacturing bikes with an improved version of the button in August. 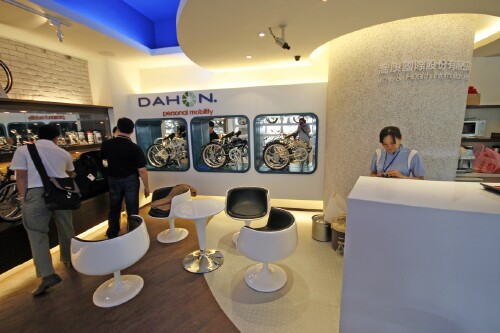 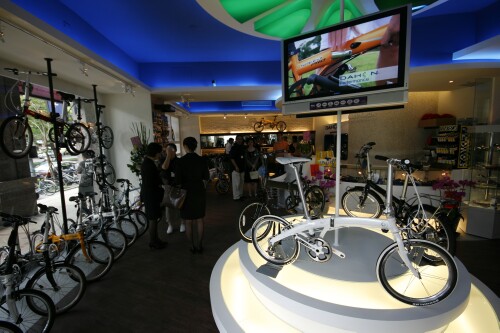 Dahon announced the opening of the company's first flagship store in Taiwan.  The store, opened in partnership with Dahon's local distributor, features over 1,000 square feet of retail space and is located next to one of Taiwan's busiest bicycle paths in Taichung County, Taiwan's bicycle manufacturing center.

Along with a wide range of folding bikes, which customers can test ride, the store carries a full array of accessories as well as an assortment of bike clothing.  A fully equipped service center completes the store's facilities.  Besides this new flagship store, there currently are over one hundred Dahon concept stores in China.

Blomson International BV, a Dutch bicycle distributor, has partnered with Taiwanese folding bike manufacturer Oyama to develop a line of folders for the European market.  The line will consist of 8 models varying from hub gear equiped to lightweight derailleur bikes.  The bikes will debut at the Bike Motion Show in Utrecht, The Netherlands with availability expected in 2009. 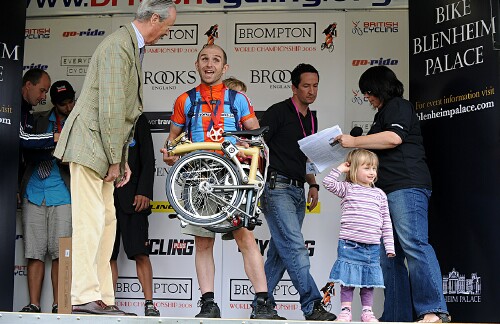 Scotsman Alistair Kay stunned the Spaniard Roberto Heras by winning the 3rd Brompton World Championship held over the weekend at Blenheim Palace, Oxfordshire.  Heras, a retired professional cyclist, former teammate of Lance Armstrong, and three-time winner of the Tour of Spain was favored to win.  Kay, an experienced road racer who rides for York Cycleworks, bested Heras by a three second margin.  Kay is shown accepting his prize of a Brompton S2L-X.

Strida will introduce the following three new folding bike models at the upcoming Interbike Expo in Las Vegas.  The expected availability is spring 2009. 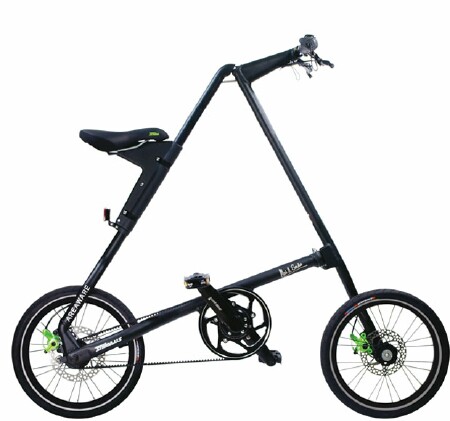 The new "MAS Special" is the Mark A. Sanders (designer of the Strida) special signature edition.  This bike features a 2-speed Schlumpf drive that shifts with a tap of the of the heel and a black anodized frame.  MSRP - $1400.00 USD. 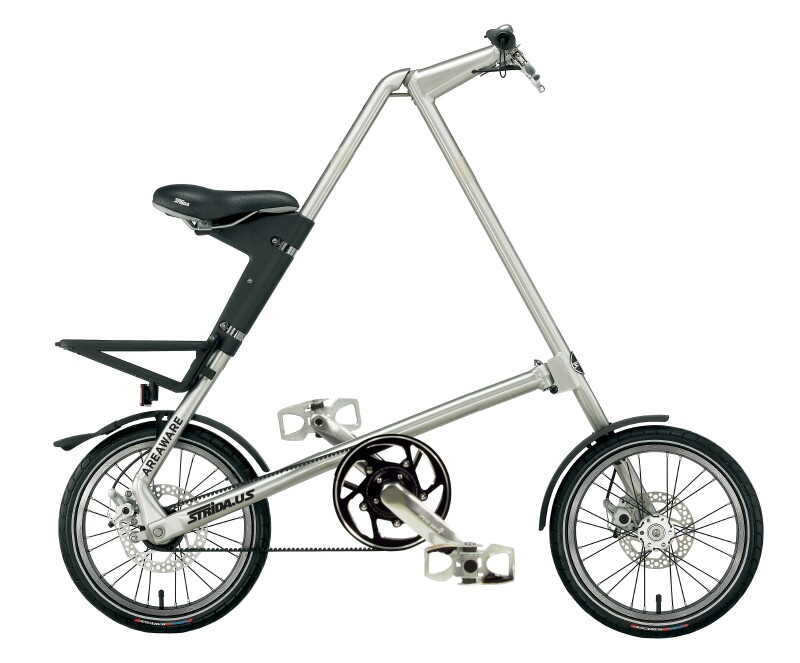 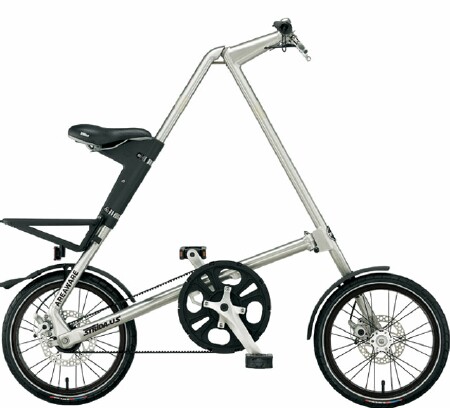 The new Strida XT was designed to accommodate taller riders with a larger frame and 18" wheels.  It has a single speed and a brushed aluminum frame.  MSRP - $1000.00 USD. 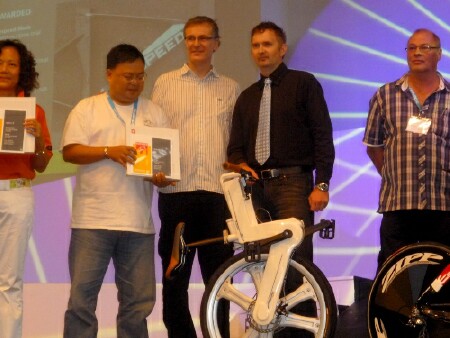 The new Pacific Cycles iF Mode won a Eurobike 2008 Award for the folding bike category at the recently held Eurobike show in Friedrichshafen, Germany.  Pictured receiving the award on behalf of Pacific Cycles were designers Michael Lin, Mark Sanders, and Ryan Carroll.

Duarte, California - September 3, 2008 - Dahon today announced record sales for the first half of 2008, representing a 32% increase in unit volume and a 30% increase in revenues relative to 2007.

"Sales have gone very well considering the general economic environment," stated Dr. David Hon, Dahon president and CEO. "We're seeing a lot of consumers turning to cycling as high gas prices and concerns about global warming begin to hit home. In a way, the current economic downturn is a blessing in disguise for the planet because people are getting a real taste of what will happen when we deplete the Earth's scarce resources." 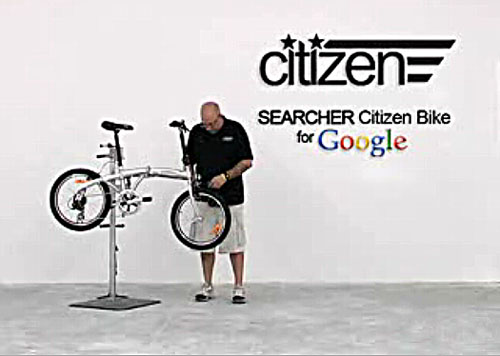 Citizen Bike has established an ongoing project with Google Inc. to offer their employees a specially designed folding bicycle named the Searcher.  The bike will be available to all Google employees through a company-wide incentive program to promote healthy and earth friendly transportation alternatives. 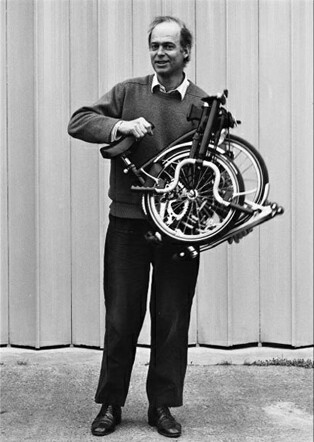 Andrew Ritchie, inventor of the Brompton folding bike gave a recent speech at iFest'08 in Barcelona.  iFest is a business innovation event held annually by Infonomia.  Ritchie spoke about the founding and history of Brompton and of the personal struggles he endured to launch the company.  You can see a video of the speech here. 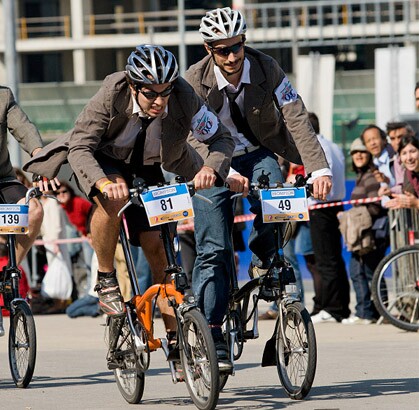 The 3rd Brompton World Championship will be held on Sunday September 28, 2008 at Blenheim Palace, Oxfordshire, UK.  The first two championships were held in Barcelona, Spain so this will be the first year that the event will be held in Brompton's home country of Britain.

The event will be a true race overseen by British Cycling but there will be a bit of added whimsy since the participants will be required to wear a suit jacket, collared shirt, and a tie.  The course will consist of two laps around the Blenheim Palace grounds totaling 13.15km.  The top placed male and female competitors will receive a Brompton S2L-X.  More information and race registration details can be found here. 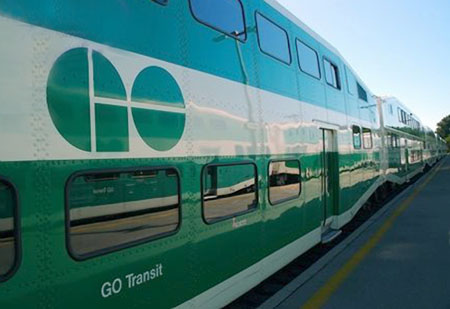 The Greater Toronto Transit Authority (GO Transit) began a folding bike pilot program on June 30, 2008 whereby one can bring their folder on all GO Trains, including during peak-period travel times.  Regular bicycles are restricted to off-peak times.  Folding bike etiquette tips were introduced to help ensure the success of the pilot program. 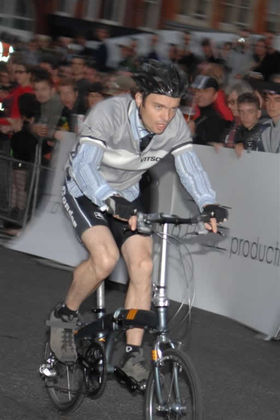 The 2008 Smithfield Nocturne folding bike race was run over the weekend in London.  Keith Henderson, pictured above, won the event riding a Dahon.  Second place went to Nigel Foskett riding an Airnimal Chameleon.  Finishing in third place was Richard Bailey on his Xootr Swift.  Keith was awarded a Dahon Speed Pro TT for his win.  Not surprisingly, Brompton, made in the UK, was the most represented brand bike in the race with over half the field riding one. 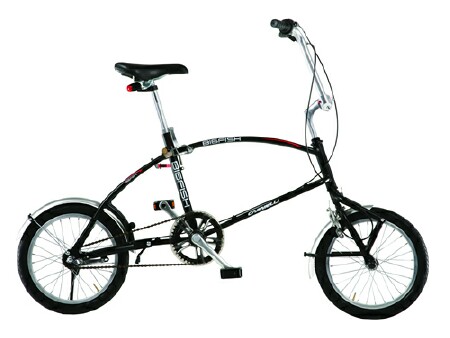 As an update to a previous posting about Bigfish, they have launched an English version website and have begun taking orders at an enticing introductory price of 399 €.  Bigfish also made a public debut in London by participating in the Smithfield Nocturne folding bike race (story above) over the weekend. 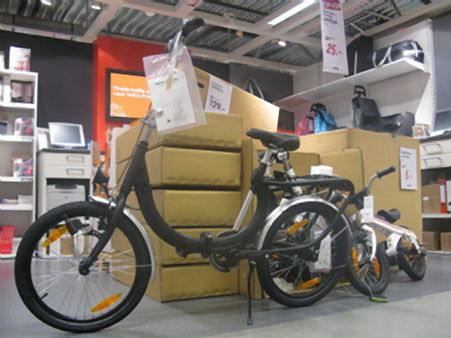 IKEA, the Swedish retailing giant, recently started selling a folding bike, the Förvåna € 249, on a trial basis in the Netherlands.  A child's non-folding bike, the Föråna € 169, was also introduced.  IKEA has been rumored to be interested in entering the bicycle market as their representatives have been spotted at major international bike shows in recent years.  IKEA showed it's affinity for folding bikes back in December 2006 by giving 9000 of their UK employees a folder and encouraged them to bike to work.  The Förvåna appears to be a rebranded Schwinn Loop whose design is reminiscent of the so-called U-frame folding bikes from the 1970's. 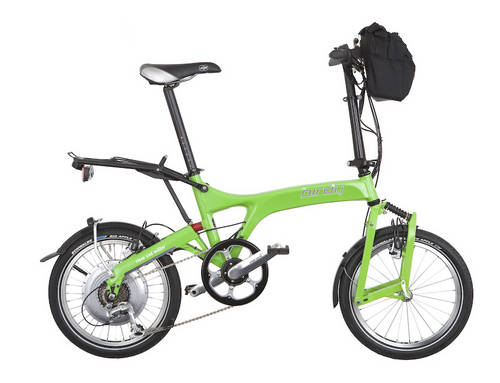 Riese & Müller, maker of the reknown Birdy, announced that they are entering the "pedelec" market.  Pedelecs, as opposed to e-bikes (electric bikes), only supply power when the rider is pedaling.  This new bike, dubbed the "Birdy Hybrid Pedelec" uses a BionX motor and controller.  The battery pack is hidden in a small bag mounted on the handlebar.  The electric-assist system adds about 6.5kg to the unpowered Birdy, bringing it's total weight to 18kg.

Along with the new Birdy Hybrid, Riese & Müller will introduce two non-folding pedelec bikes, the Jetstream Hybrid and the Delite Hybrid, at the upcoming Eurobike 2008 Show in September. 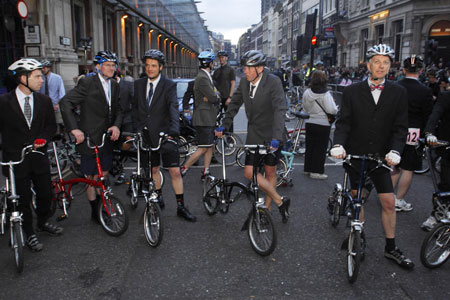 Building on the success of last year's inaugural Smithfield Nocturne folding bike race, it will held again on June 7, 2008.  In true London commuter spirit, the competitors, dressed in business attire, will run to their bikes, carry them for a distance, unfold them and race for 5 laps.  More info and entry details can be found here. 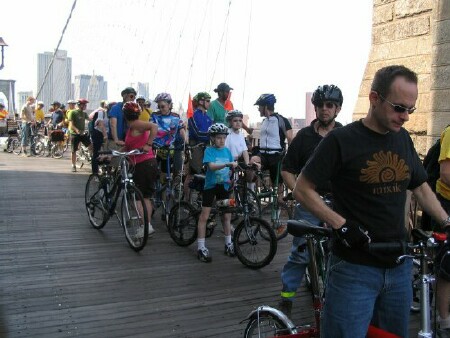 Times Up!, a New York City based environmental non-profit, will hold its annual folding bike ride and festival on May 10, 2008.  A leisurely 10 mile ride through Manhattan and Brooklyn will be followed by a festival where you can learn about folding bicycles and see and try out different models.  Click here for details. 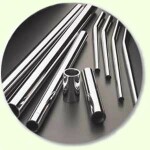 We get emails frequently from people who are in the process of buying a folding bike asking a common question.  "Should I buy a steel bike or an aluminum bike?"  We asked our good friend and bike frame expert Peter Whitford to answer.  His response can be found here.

I came across this new folding bike from a Slovenian company called Bigfish.  The front end is reminiscent of a Birdy but the back end folds in a different way.  You can check out a video of the bike here.  I'm waiting to hear back from Bigfish regarding pricing and distribution, I'll update as more information comes available. 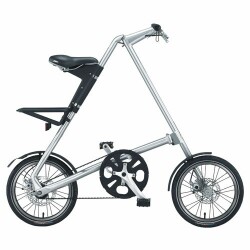 A few readers have alerted me to the rather disparaging article about the Strida on the Wired Magazine blog with its fairly humorous video. As I have written before, I've never been a big fan of the Strida. I rode one of the early models and have briefly ridden the new Strida 5.0. I think its a reasonable bike for multi-modal transportation where you need a compact, lightweight folder for a shortish ride to and from the bus or train. Other than that, in my opinion, the bike is too limited in terms of gearing and ride quality to be used in a more general fashion. Its also a bit on the pricey side at $800. As for styling, its really not my cup of tea and I have always taken exception to it being called "revolutionary" or as Strida's marketing pitch puts it "the first completely new bicycle geometry in 95 years".  Well, here is a bit of a history lesson.  In 1919, Charles Haskell Clark filed a patent (granted in 1921) for a portable bicycle that was easy to carry onto trains or street cars.  Below left is a photo of Mr. Clark from the December 1919 issue of Scientific American with his "city bicycle" and below right is his patent drawing.  There are very few advances that are truly revolutionary in the bicycle world, most are evolutionary. 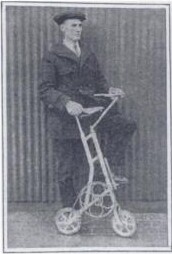 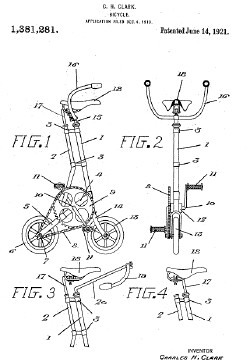