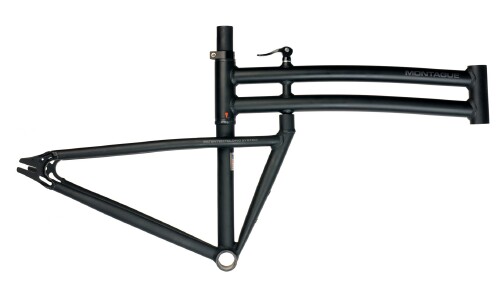 Starting in 2013, Montague will begin selling framesets along with the rest of their full-size folding bike product line.  Three different frame styles will be offered: two pavement-style frames, one with horizontal dropouts and one with vertical dropouts, and one mountain bike frame.  This move will be a boon to those that want to pick and choose their own components to create their perfect folding bike.  More info can be found here.


Tern - The New Folder On The Block

Tern, a new folding bike brand that was introduced to the public a few months ago at an unveiling event in Taipei, has begun shipping bikes.  The Tern product line consists of 22 models of folding bicycles ranging in price from US$400 to US$3,500.  The company's top-end offering, the Verge X20 seen below, is built for speed and weighs in at just a tick over 20 lbs. 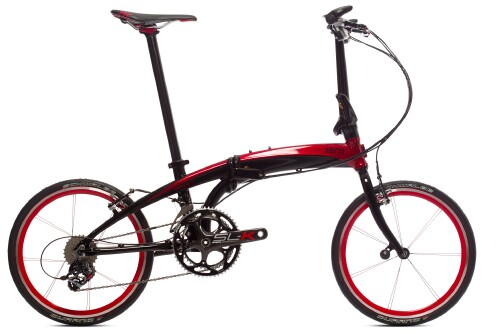 Tern was founded by a mother and son team, Florence and Joshua Hon, as in the wife and son of Dahon founder Dr. David Hon.  According to Joshua Hon, Dahon's former Vice President of Sales and Marketing, Dahon has been having trouble with quality control so he decided to venture out on his own.  Quite a few Dahon personnel also exited the company with him and are now at Tern.  Now rather than speculate on what looks to be a family feud, we'll wait for all the juicy details to fully trickle out as to what exactly transpired before just guessing.  What is known is that Dahon has sued Tern in the U.S. District Court of California in an effort to get them shut down.  With Tern's deep product line-up aimed at almost every offering in the Dahon folding bike line, they could take a real bite out of Dahon's dominant folding bike market share if sales go well. 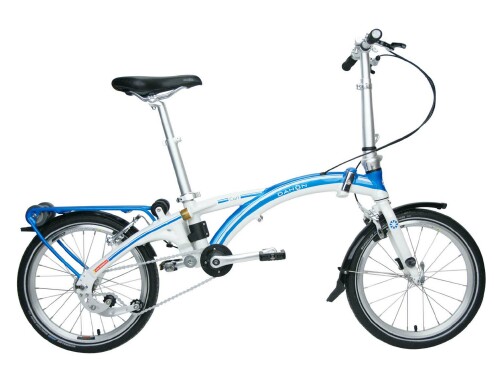 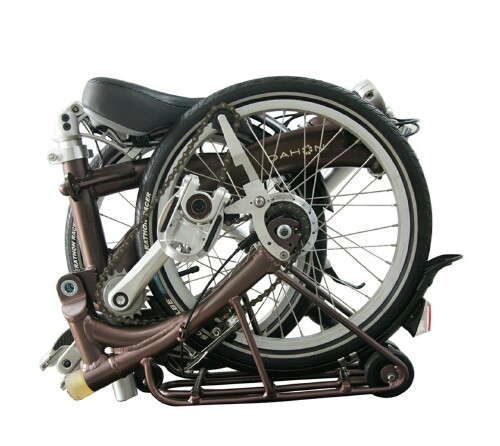 While there was no formal introduction, the Dahon Curl (top), which was shown as a prototype (bottom) a couple years back at the Taipei Cycle Show, has appeared on Dahon's Chinese website recently.  The design is quite reminiscent of the Brompton in the compact way it folds.  Dahon claims a 20% reduction in folding size over their other folders.  No word yet on pricing or availability, especially outside China. 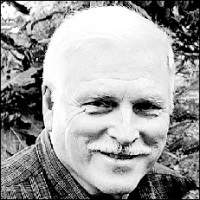 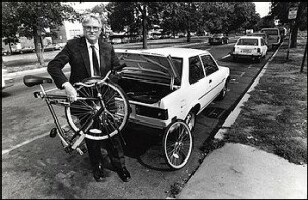 Harry Montague, an architect and co-founder of Montague Bikes died Feb. 2 of lymphoma at the age of 77. Harry designed his first full-size folding bike in the early 80's. Being a large man, he found the existing smaller folding bike designs too small for his liking. After being turned down by many bicycle manufacturers to make his bike, he and his son David started a business in 1987 to produce his bikes.

In 1997, the Montague business received a two-year grant from the Defense Advanced Research Projects Agency. The Defense Department wanted the company to develop a rugged, heavy-duty mountain bike suitable for paratroopers. The bike had to be tough enough to handle terrain anywhere in the world and also be able to fit into parachute rigging. The result was the TENS, or Tactical Electric No Signature mountain bike. It used an electric motor that allowed the bike to move silently and was undetectable to most radar systems. The Montagues also developed a version of the bike without the electric motor called the Paratrooper. Many of them have been used in Iraq and Afghanistan. In 1999, Montague decided to start selling a civilian version of the Paratrooper which is available to this day. Montague also sells a line of folding bikes under the SwissBike brand. 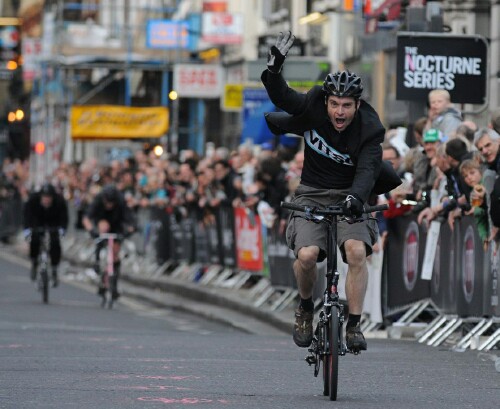 Keith Henderson rode to his third consecutive win at the 2010 Smithfield Nocturne folding bike race aboard a Dahon Mu EX.  David Rees and Antonius Wubben, both riding Bromptons, took 2nd and 3rd places respectively.  Video of Keith being presented with his first place prize of a Dahon Speed Pro TT can be found here. 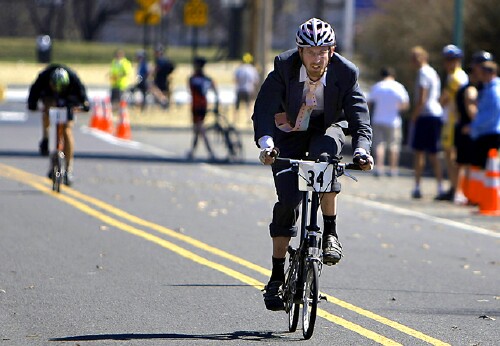 The 5th Annual Brompton World Championship will be held on October 3, 2010, at Blenheim Palace, England. 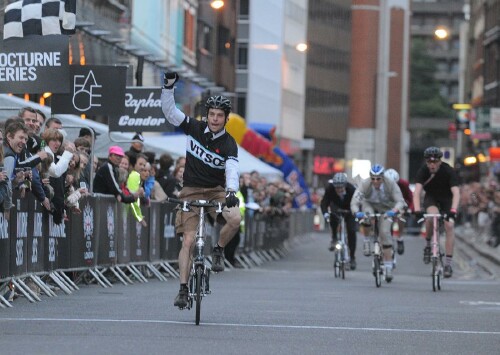 This year's Smithfield Nocturne on June 19th is likely to be bigger and better than last year, with 15 thousand spectators expected to enjoy a range of events from the Elite Criterium to the Longest Skid competition.

A regular crowd pleaser is the folding bike race which sees 80 riders battle it out for the title of London's fastest commuter.  Southborough Wheeler's Keith Henderson, who has triumphed the last two years in succession will be riding again in an attempt to make it a hat-trick.  Choice of bike, and the resultant constructor's championship is also hotly contested as the manufacturers fight to be top dog on the day.  Last year, Brompton fielded a suitably well blazered team, and Rapha's Graeme Raeburn came a close second on his custom Brompton.  However, with Dahon as the main event sponsor and Keith riding his Dahon MuSL bike into the top spot for the last two years, the US based manufacturer will be providing Keith with a 2010 Mu EX in an attempt to give him an edge in this fast paced and hotly contested event. The Mu EX - Dahon's top of the range bike - sports a full Sram Red drive train amongst it's top end specifications. The first of the evening's races starts at 5.30pm. 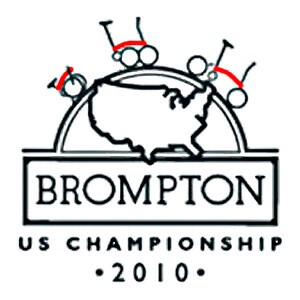 The first annual Brompton U.S. Championship will take place March 20, 2010 at Memorial Hall in West Fairmount Park, Philadelphia, as part of the Philly Phlyer Collegiate bike race.  The race will begin at 1 p.m.  Entry to the event is limited to Brompton folding bikes and like the Brompton World Championship, all participants are required to wear business attire will run to their folded bikes at the start, Le Mans style.  The top male and female finishers will receive roundtrip airfare and free entry to the Brompton World Championship at Blenheim Palace, England.  More details and online registration can be found here. 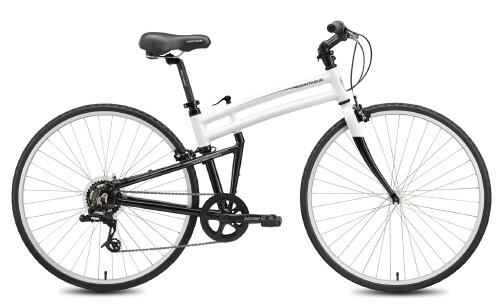 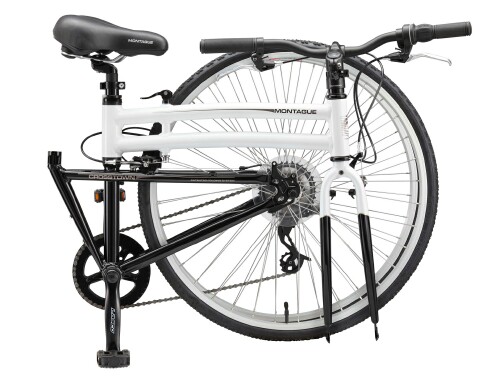 Montague has announced the availability of a new folding bike called the Crosstown.  The Crosstown features 7-speeds, 700c tires, and the CLIX™ Wheel Release System.  The bike also incorporates a new invention called the Octagon, a stem that is height-adjustable with just a simple click of a button.  This allows the rider to have the handlebars at whatever height feels comfortable.  The Crosstown is available for purchase at a suggested retail price of $659. 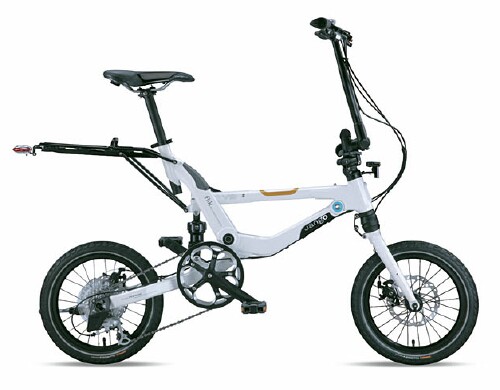 Jango Bikes will be introducing their new Flik series folding bikes at the Interbike International Bicycle Expo in Las Vegas this week.  The Flik’s innovative hydroformed aluminum frame features the patented "VertiLink" folding mechanism which offers three utility positions: 1) Riding, 2) Shuttling and 3) Storage.  The manufacturer claims a 4 second folding time to change from riding mode to storage mode.  The Flik series will come in 5 configurations: the T8, V8, V8i, T9, and V9 and range in price from $1199.00US to $1599.00US.  Expected availability is March, 2010.  The press release, photos, and configuration details can be found here. 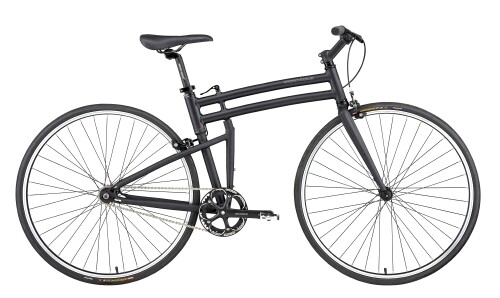 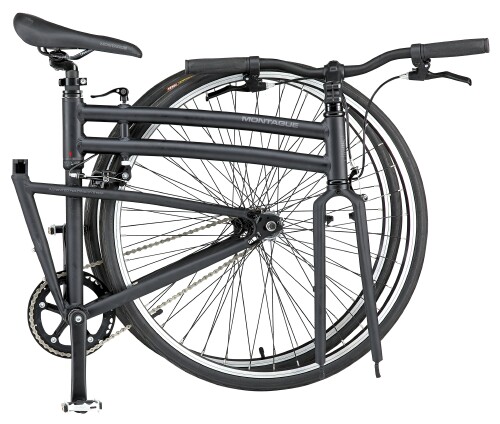 Montague Corporation, well known for its line of full-sized folding bicycles, launched the Boston - the first 700c single speed folding bike.  The Boston is powered by a single-speed drivetrain featuring a flip-flop hub. This special hub allows riders to change between a fixed-gear and free-wheel setup with little effort. The 42 X 16t drivetrain is geared  for city riding.  The Boston retails for $699.99US and will be available in January, 2010. 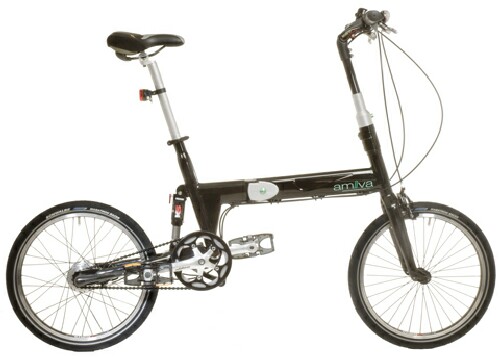 Created by Philippe Poupard, AMiiVA portable bikes are the first bikes with a folding frame manufactured in France to use the proprietary "Hingenious" Technology developed by Ciel & Vents. AMiiVA bikes are built with a light full-sized suspended folding frame made of high grade aluminum alloy (total weight between 10 and 11.5kg) and the Hingenious folding mechanisms (handlepost and central hinge) that make folding and unfolding safe, fast and easy.

The AMiiVA Hingenious front stem hinge is totally integrated into the stem enabling the use of standard adjustable handlebars and integrated headsets. The Hingenious central hinge is designed to lock up automatically when the bike is ready to go and to keep the front and rear wheels securely locked together when folded. 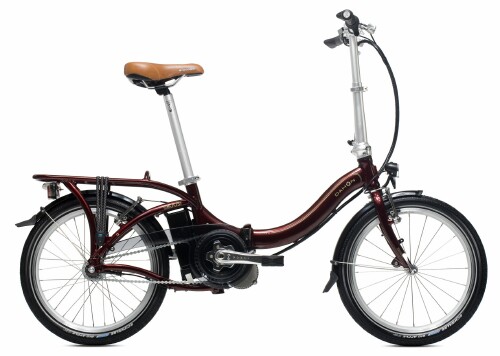 Dahon is set to launch the Boost, an electric folding bicycle, at the upcoming Eurobike show.  Equipped with a 250W motor and a 3x3 gearing system, the Boost can achieve a top speed of 25km per hour.  It can also be used as a regular pedal powered bike when the electric drive system is turned off.  The fully equipped weight of the bike is 19.6kgs.  No word yet on pricing or availability. 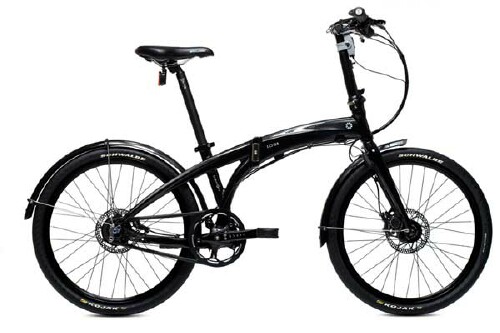 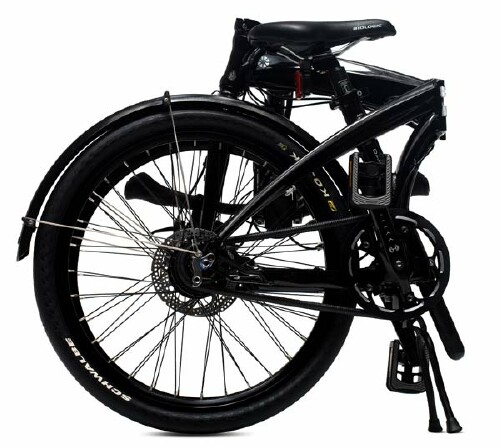 Dahon will introduce the IOS line of full size bicycles with an ultra compact fold at Eurobike next month. The IOS XL pictured above uses uses Hydroforming technology to shape the aluminum tubes of the bike.  The bike features a new adjustable stem design, an integrated light, phone/GPS/device charger, and pump.  An 8-speed Shimano hub gear rounds out the features.  The IOS bikes will be available in 2010 priced at €999-1499.  Update:  The IOS XL took the Gold Award in the folding bike category at the Eurobike show.

Separately, Dahon announced that they sold 254,000 folding bicycles in the first half of 2009 compared with 239,000 units during the same period in 2008.  This represented a 6% increase in unit volume and a 27% increase in revenues compared with the year earlier period. 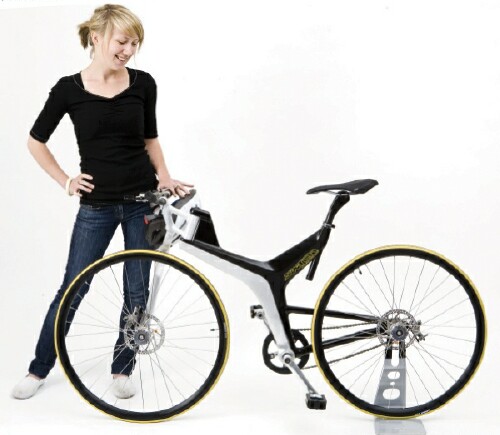 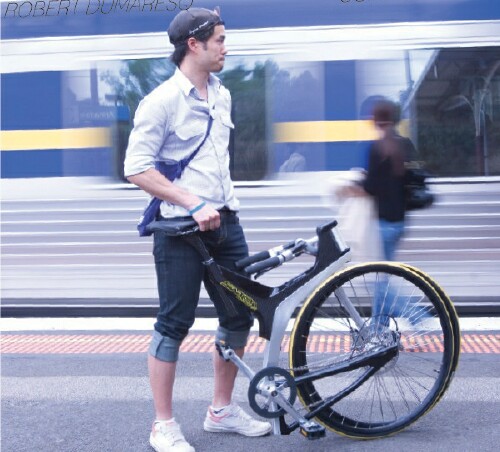 Robert Dumaresq was the Gold Winner of the 2009 Australian Design-James Dyson Award with his "Switch" commuter folding bike.  The design innovation is Switch's ability to fold in one smooth motion making it one of the fastest bikes to fold.  Switch does not rely on any structural locking mechanism to fold as the weight of the rider keeps the frame open and rigid.  There is a spring loaded ball bearing that stops the rear section of the frame from unfolding prematurely when maneuvering or handling the bike.


A Folding Bike Takes 2nd at the IBDC 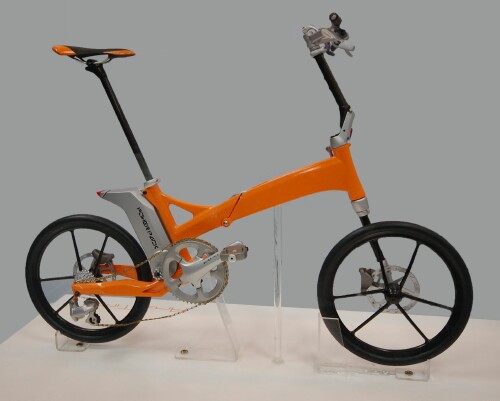 The 13th International Bicycle Design Competition winners were announced on the opening day of the Taipei International Cycle show that was held March 17-20.  Folding bikes made a significant presence at this year's competition comprising 11 designs in a field of 20 finalists.  Taking 2nd place in the competition was the "Anytime" folding bike designed by last year's IBDC winner, Larry Chen.  The bike features a removable power assist unit called the "power pack".  The externally mounted power pack design integrates a motor, control unit, battery and tail light. 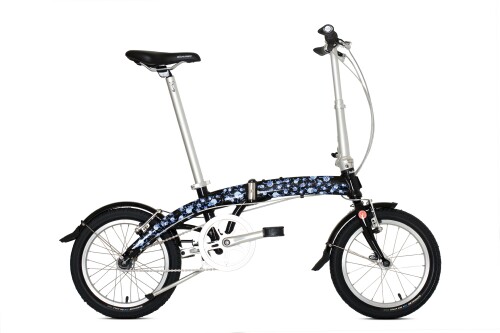 Dahon unveiled a limited edition folding bike created in partnership with Kukuxumusu, a Spanish company whose name means "kiss of the flea" in the Basque language.  Kukuxumusu specializes in product design and clothing and is known for its distinctive as well as humorous style.

The sheep themed bike is based on the Dahon Curve D3 model.  Dahon will produce 1000 units of this limited edition bicycle and will ship to distributors worldwide in June. 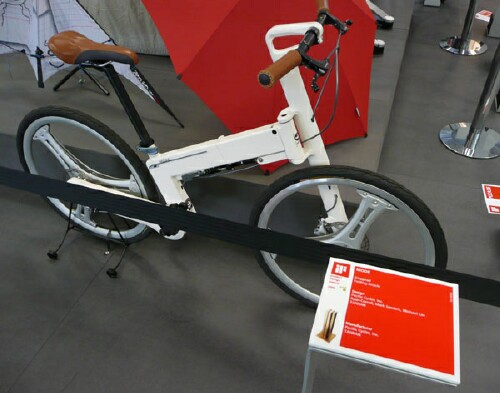 The awards keep on coming for the iF (Integrated Folding) Mode folding bike from Pacific Cycles.  This time it is a Gold Award from the International Forum (iF) Design presented at the opening day of CeBIT in Hannover, Germany on March 3.  Perhaps Pacific Cycle's use of the "iF" moniker helped in winning the iF Design award?  The prestigious iF Design awards are presented annually in 16 categories.  The iF Mode won its award in the leisure/lifestyle category.  Mark Sanders, the bike's designer accepted the award on behalf of Pacific Cycles at the award ceremony.

"This folding bike from Pacific Cycles also functions as a high-class city bike which can be brought into highly compact form in just a few easy steps.  This represents a variable functionality which is required in today's city bike.  It could become an ideal supplementary transport medium to help relieve congested downtown areas," stated the award jurors.